As one of the leading figures of the No Wave Cinema Movement (1976-1985) which developed out the New York East Village music and art community, Amos Poe is considered one of the world's first punk filmmakers. Contemporaries of the time included Jim Jarmusch, Eric Mitchell, Beth B and Scott B, Vivienne Dick, John Lurie, Becky Johnston, James Nares and Nick Zedd who embraced the artistic sensibilities of the avant-garde, French New Wave, and B-Movie genres. In 1975, Poe collaborated with artist Ivan Kral (bassist of The Patti Smith Group) to create The Blank Generation, which includes early performances of Iggy Pop, Blondie, Patti Smith, Television, Richard Hell and the Heartbreakers, The Ramones, Talking Heads, and Wayne County. Beginning in 1976, Poe experimented with the theme of alienating modernity amid new environments in his next three films, Unmade Beds, (1976) The Foreigner, (1978) and Subway Riders (1981). Unmade Beds is an homage to Godard's Breathless while The Foreigner, starring Eric Mitchell and Debbie Harry, shares sensibilities with Jim Jarmusch's Permanent Vacation and Susan Seidelman's Smithereens. Poe was also the director of the Public-access television cable TV show TV Party hosted by Glenn O'Brien and Blondie’s Chris Stein. Widely and wildly admired as a filmmaker, writer and producer, The New York Times has called Amos Poe a “pioneering indie filmmaker.” One of the first punk filmmakers and Eddie Cockrell of The American Film Institute summed it up in a nutshell: “Amos Poe is not afraid to simultaneously challenge and move an audience. Seldom, if ever, in American cinema has a sensibility of such avant garde and seemingly pessimistic tastes produced films of such compassion and reflection.” Boy Scout talked to Poe about culture, cockroaches and Nat King Cole. 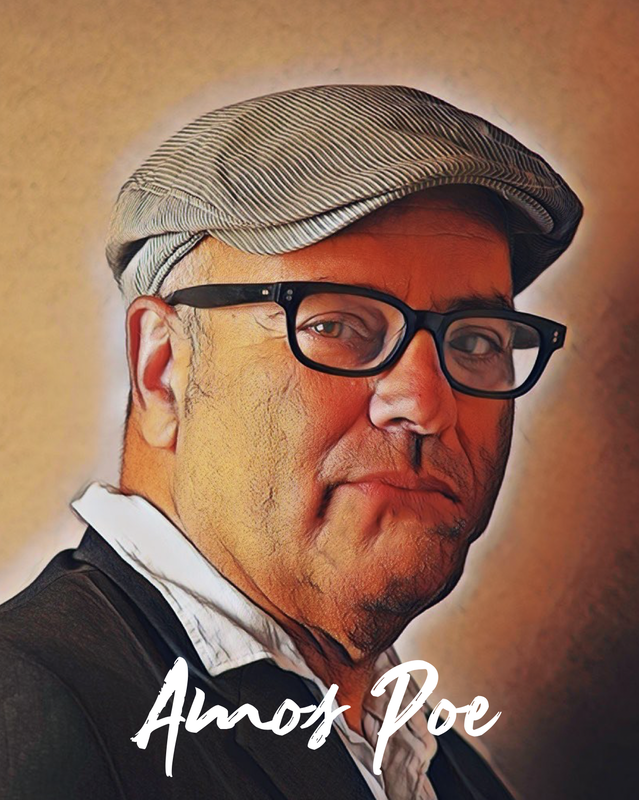 Boy Scout: If you arrived in New York City in 2019 filled with great ambition, how might you ascend to your artistic summit?

Amos Poe: How will the stories survive? I'm not sure that they will… or that they need to on some level. On the more, sort of, Einsteinian level. But I think culture inevitably survives… kind of like a cockroach.

It’s sort of Darwinian in the sense that culture has to change, or evolve. Or it becomes a fossil, like a museum piece.

Human design, or the latest 3.0 version, is, I think, predicated on the ideal of planned obsolescence. We're designing our own downfall. It's sort of like entropy. Like Dante said; “We have to abandon hope.” We have to bend the law first.

World War III.. we'll leave a few stalwart beings ready for a change. Culture cannot survive without nature. Culture and change are kind of inevitable. We're going from, like, the fossil fuel century, to a new form of energy, and always when you go from one to the other, there's tremendous changes.


Boy Scout: The late Harry Dean Stanton believed “Everything is predestined. Nothing is important. Life is an illusion. It’s all a movie. Nobody’s in charge” which is lovingly referred to as his Appreciation of Nothing. Do you have a guiding life philosophy that keeps you on the path?

Amos Poe: My philosophies can be summed up in the following: “Nihilism is best done by professionals” which is Iggy Pop line, William Goldman's line “Nobody knows anything,” Dante Alighieri line “The love that moves the Sun and the other stars,” Nat King Cole's, there's a song called Nature BoyI think, he says “The greatest thing you'll ever learn is to love and be loved in return.” The last one is “Grateful for what has been given, what has been taken, and what has I've been left behind,” those are my philosophies, I think.

Boy Scout: The last couple of years has seen a country divided. Has the current political climate inhibited or infused your work?

Boy Scout: Was there a moment in your artistic life where you took an out-of-character risk and it transformed you?

Amos Poe: There are many times where I have taken out of character risk and it's transformed me. I would say that every risk is an unwitting act of defiance courage, and transformation.

Boy Scout: Has your bravery grown through the ages?

Amos Poe: Unfortunately, not. But I'm working on it. Sometimes youthful bravery uses a mix of bravery and foolishness, but my favorite Patti Smith line is; “Who can know the heart of youth but youth itself?”

Boy Scout: In a media mad world, can sincerity still be a virtue?

Amos Poe: I struggle with sincerity, for me sarcasm is kind of like a drug.

Boy Scout: Who are your real life heroes?

Amos Poe: I'm not sure if this is “real life” or “reel life” but Buster Keaton is definitely a hero. Abraham Zapruder, he is my hero. My three children are my heroes because they survived my parenting with light and warmth, and my friends, and my girlfriend. She is my hero.

Boy Scout: Abraham Lincoln said: “To summon up our better angels.” What are the words you live by?

Amos Poe: What are the words that I live by? Serenity. Courage. Wisdom. Awareness. Acceptance. Action.

Boy Scout: What is your greatest regret?

Amos Poe: Greatest regret? Not having had a heart-to-heart with my ex-wife Sarah Charlesworth before she passed away.

Boy Scout: With "The Blank Generation," which serves as an indispensable piece of film and music history, you created a No Wave style and captured a potently raw meeting of cinema and punk. Where in the world can you find rough, raw, and revolutionary today?

Amos Poe: Right now, we are in the Golden Age of experimental cinema and I think you can find it on YouTube, you can find it a lot of online venues if you keep searching and going down rabbit holes.

The Blank Generation is kind of like a historical artifact at this point but what I tried to do there was just to have a relationship between the sound and the image that wasn't in sync, per se. I happened to be lucky, I happened to have come at the same time that punk music came in.

People were doing, what they were doing, which was generally some form of art. You know, you’re kind of like paddling out, like I'm a surfboard or something right? And there's 200 surfers paddling out, you get out there and suddenly there's like a hundred foot wave, and you kind of go, well, it’s either going to kill me or I'm going to have the best ride of my life. So, you take the shot and you paddle into the wave and you ride it. Some people get crushed by it. Some people have a really long ride. Some people last a few minutes. Some hours, some years, some decades. So, just ride the wave. Then afterwards, you look back and go “Holy cow! that was incredible wave,” but I think when you're in the wave, you're not really aware you're in that big of a wave. If you can't see the whole wave… I mean that's my impression of it. I'm not sure, to what extent we were all aware of what was going on. You know, we are aware of somethings, but I'm not sure if we were aware of the cultural impact it was going to have. At least I didn't. You just hang onto the board and just enjoy the ride. You know the thrill of it, or whatever. Whatever is part of the ride that you're into. You know, some people are looking for a longer ride. Some people are just like “Wow! Let me get up on that crest and just peel right off it.” Blondie, or The Ramones, or Patti (Smith), or Television. Everybody had brought something to their influences, let's say. It wasn't without any influences, obviously, and then you just take it you know for the moment, you know, in the present.

So, I think beyond the sort of artistic ambitions of everyone there, it was more like… you have your artistic ambitions, which is kind of like the fuel. Then you're also kind of being reactive towards the past, where it’s the kind of thing like the past doesn't matter… other than whatever kind of influence I can take from it. I think the prevalent philosophy, sort of mentalistic philosophy of “No Future” …so since there's no past, no future, you've got to be in the present. So, what's really going on today?

Boy Scout: Share a few thoughts in honor of the late Glenn O’Brien and the groundbreaking access cable show 'TV Party" which remains well ahead of its time.

Amos Poe: The TV Party phenomena… yeah, it was Glenn O’Brien’s idea along with Chris Stein (Blondie) and Debbie (Harry) to some extent. Basically, Glenn's sort of Dadaesque version of Hugh Hefner's Playboy After Dark. Let’s have a TV show! Let's have a cable show! And it was so primitive in a sense that it was so much fun… the primitiveness of it. You never knew what was going to happen. I think you mentioned that it was ahead of its time? I'm not sure if it was ahead of its time or if it was “ofits time” because I don't think you can really replicate it. I think it becomes just like another talk show, performance art or something. But I mean Glenn had so much wisdom about so many topics, great and small, and you know, music… it was improvisational, so it of kind had a jazz quality to it as well. Yeah, I miss Glenn. He was very generous, very funny, he really believed that aesthetics and ethics were correlated.

You know Glenn and I had an ongoing, sort of up-and-down relationship, I would say. He could be the most fun to be with, or could be the most exaggerating. Like he would bitch about my editing, but then at the same time, he would back me up when somebody else bitched about it. Because he would say “Oh it's supposed to be experimental, that's why we're doing it this way.” He could be in my face about it but to anybody else he was like very much behind it. So, it was kind of interesting.

One of great things about Glenn was how he could be very contradictory… how he could flip in like twenty seconds or something. Or how he could be the (GQ Magazine) Style Guy? And then you'd like talk to him about it and he would say “Oh no, no, no style’s boring.” I say “But, you’re the Style Guy!” and he’d go “Yeah, I know.” Once we we're walking down the street, saw someone and he said “I hate people who have no fashion sense. Like wear the same thing in the daytime as we wear at night. You know, you shouldn't be doing,” and then we ran into Klaus Nomi who was wearing, like, a girl's shirt, his makeup and stuff, and sort of like vinyl pants and high-heeled boots…and we start talking to him… and I just met Klaus, and I introduced him to Glenn who was immediately really fond of Klaus.

Boy Scout: As the father of modern indy American cinema, where do you find your motivating heartbeat? Does desperation drive determination?

Amos Poe: Desperation definitely drives determination. I think that's where the planet is headed to towards, actually.

Boy Scout: How would you like to be remembered?

Amos Poe: I would like to be remembered: “He lived, he loved, he left.”

Boy Scout: Your artistic urges have moved you from film to canvas, and in 2013 you premiered your first solo show ROBOTS. Are you still hungry to explore the bleakly beautiful?

To learn more about Amos Poe, visit him here